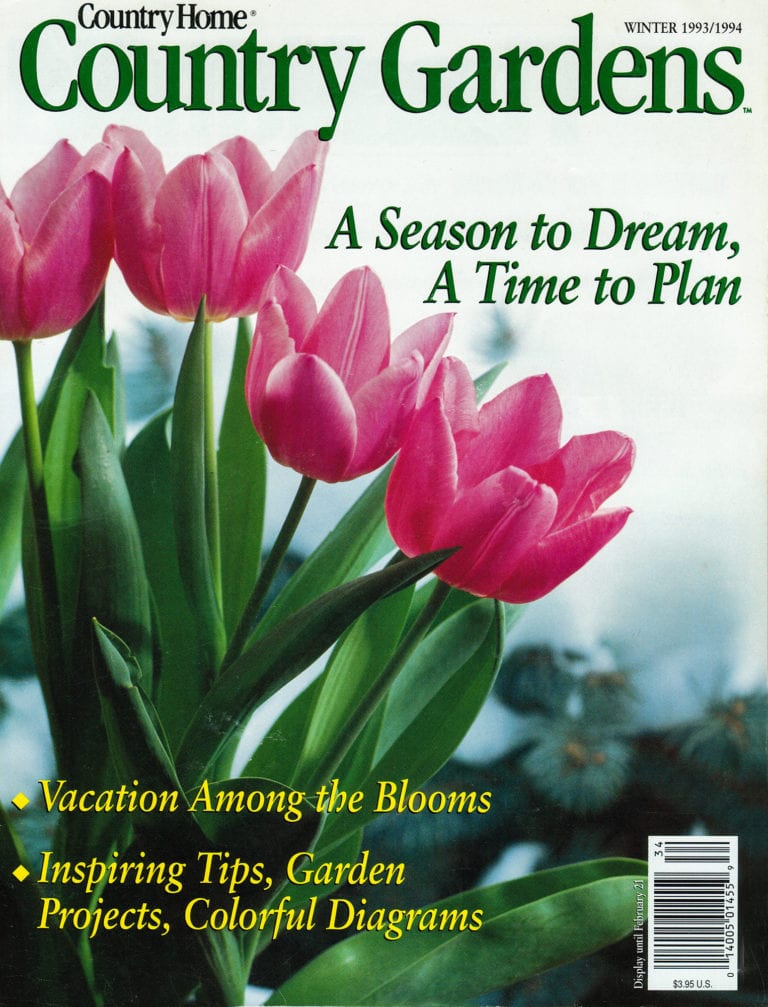 Ordinarily if you want something as utilitarian as a garden storage shed, you don’t go to an architect. But Bindy and Stephen Kaye didn’t want anything ordinary.

Though its intended use is strictly workaday, there is nothing routine about the Carpenter Gothic-style shed they erected on their rural Millbrook , New York, farm. It has been designed for his-and-her practicality with a gardening center on one side for Bindy and storage for Stephen’s firewood cache on the other. […]

“I wanted something that would be truly architectural because this shed would be seen from the house and would serve as a backdrop for my garden,” Bindy says.

That it possess skillfully drawn lines wasn’t the only requirement. The Kayes also wanted a shed that would:
• Include Space for tools and a small workbench for potting.
• Provide storage space conveniently near to the house for firewood.
• Not block the charming view from the house toward the big yellow barn sitting behind their garden. […]

To realize these sometimes complementary, sometimes competing requirements, the couple worked with architect James (Jimmy) Crisp of Brewster, New York . He has had extensive experience designing in a region known for its distinctive, historical architectural styles.

One of the predominant styles is Gothic Revival, and Carpenter Gothic is a modest version of it that’s usually constructed with wood. The variations of Gothic, with their steeply pitched roofs, often with cross gables, were popularized throughout the Hudson Valley and much of the nation by the writings of pre-Civil War architect Andrew Jackson Downing. He felt a subdued Gothic was suitable to rural families because, like those diligent people, such houses were “honest, straightforward, and openhearted.” […]

Though its style may be inspired by history, the 11×12-foot, nearly 17-foot -tall shed is as uncomplicated as it is charming. It stands on concrete footings and was built from pine framing with clear-pine, board-and- batten siding. A high-quality paint finish (matching the house’s sunny yellow) and a shingled roof protect it from the elements.

To give both Stephen and Bindy what they wanted, Jimmy devised a single shed with several facets. It’s really two back-to-back sheds with a covered walkway between them. On one side are a pair of open, 4-foot-deep storage compartments for firewood. There are no doors on this side of the shed, so winter chores can be accomplished unencumbered.

For the garden side, there are doors on both 6-foot-square compartments. A workbench has been installed on one side. The other wall is wide open for storing tools, mulches, overalls, and whatever else needs a handy resting spot.

Such utilitarian considerations aside, the shed also has become the architectural element the Kayes wanted for their backyard. “Looking out the window of the library in the house, you can see straight through the middle of the shed toward the barn. It gives a quite nice perspective,” Bindy says.

This is the web site of Crisp Architects.

For each visitor to our Web page, our Web server automatically recognizes only the visitor’s domain name, but not the e-mail address.

The information we collect is used to improve the content of our Web page, to notify you about updates to our Web site and to contact you for internal marketing purposes.

If you do not want to receive e-mail from us in the future, please let us know by sending us e-mail at the above address.

With respect to Ad Servers: We do not partner with or have special relationships with any ad server companies.

From time to time, we may use your information for new, unanticipated uses not previously disclosed in our privacy notice. If our information practices change at some time in the future we will post the policy changes to our Web site to notify you of these changes and provide you with the ability to opt out of these new uses. If you are concerned about how your information is used, you should check back at our Web site periodically. You may prevent this information from being used for purposes other than those for which it was originally collected by e-mailing us at the above address.

Upon request we provide you with access to a description of the information that we maintain about you. Please e-mail us at the above address to access this information.

If you feel that this site is not following its stated information policy, you may contact us at the above addresses or phone number.

What Our Clients Say

I have been working with Jimmy Crisp and his firm for over 10 years. He has transformed our 240 year old home and property and we continue to work with him on multiple projects. His sense of style, creativity and attention to detail is unparalleled. We renovated and expanded our main house, built a large barn and guest house, a wine cellar, pool area and our current projects include a pergola, stone house addition with a game room, pool house and gym. I trust Jimmy implicitly and depend on him as I live in a different state than my weekend home. He is a wonderful collaborator, always respectful and truly takes the time to get to know you, your lifestyle and your taste. Our home has been featured in "O Oprah" magazine and is also home to many events. I hope we can keep working with them for the next 20 years!

We had a wonderful experience with Crisp Architects. We wanted a pool house the reflection our love of Italy and food and we totally achieved this. I would highly recommend Crisp Architects. They were wonderful to deal with and we love our pool house. Would love to use them again for a future project.

Jimmy designed our home, from the ground up, and he and Lin Chamberlain built it. We could not be happier. It was a wonderful and easy experience working with them, and the result is a great, comfortable, and charming home. Jimmy and his staff were at all times helpful and responsive, and Lin and his crew were the same. The house was built on time, in spite of difficult conditions (unseasonable ice, and cold) and it is solid, warm in the winter, cool in the summer, and easy to live in. Jimmy was and is flexible and responsive in his approach to our needs, while maintaining a wonderful design aesthetic that is garnered many complements. I highly recommend Jimmy for any project.

I found Crisp Architects' website many years ago, forging our dream of hiring Jimmy Crisp to design our hypothetical addition to our small house built in 1785. Ten years later, with a comparatively small budget than their norm, located across the river, in Orange County, New York, I wrote an email to ask if we were worthy. Almost immediately, I was treated to a personal phone call from Jimmy Crisp, and began to feel the kind, white glove treatment they naturally provide. From that first conversation, to where we are today at mid-construction of an incredible addition and renovation that Crisp Architects designed, I cannot say enough about the entire team and level of expertise. They are not only the sweetest people, but they are true experts in their trade, and particularly with historic architecture.
Communication with Crisp Architects is immediate, reaction to your ideas is open minded and responded to with honest, valuable feedback, usually adding a new way of thinking to consider. My husband appreciates how Crisp successfully blended our old house architecture with the addition so beautifully, and how the team remains engaged with you and the project until its completion. We could not be more thrilled and we only hope to be able to hire them again for additional building on the property!
Never once did I feel like we had the small project across the river, and they have kept us in our modest budget. We love Crisp Architects!

Crisp Architects are a wonderful team headed by James Crisp. They listen well and then go off and create a beautiful plan. Remodeling can be very stressful but with Crisp Architects as your partner you can be sure all the details are taken care of. We could not be more pleased with results.

Jimmy Crisp and his team did an outstanding job designing our screened in porch, expanding family room, and new kitchen. Jimmy's plan provided us with an improved indoor and outdoor living space that better accommodates the way in which we live, and in addition, allows us to maximize the use of our home. Jimmy and his team could not have been nicer and more professional as we progressed from the early stages of this project through the construction phase. I will not hesitate to use Crisp Architects in the future.

We hired Crisp Architects to design and oversee the renovation of our 100 year old barn and carriage house home. Their design was respectful of the historic nature of the house while bringing it up to date with all the necessary modern conveniences. I have nothing but positive things to say about our experience with Crisp Architects from the level of service of every employee to the beautiful end product. In fact, since our renovation, we have been asked several times to include our home in the Historic Homes Tour in our area.

We’ve just sent you an email. Click on the link in there to confirm your subscription.